Gamo Takes On Swarm of Iguanas

When you have an invasive species that threatens not only other native wildlife but also critical infrastructure, you need to take action. In South Florida, Puerto Rico, the Caribbean, and other South American locations, the iguana has become such a pest.

Beyond the destruction of crops, these locations are seeing erosion, building foundation damage and collapsed roads due to Iguana dens.

“Dens are tunnels that can be 70- or 80-yards long and they branch out like a labyrinth,” said Harold Rondan, owner of Iguana Lifestyles LLC near Miami, Fla. “It’s easy to see the damage they do.” Without the presence of a significant natural predator, iguanas have propagated so wildly that property managers and municipalities are scrambling to find a solution. That’s where Rondan’s business comes in.

The need to remove invasive species is certainly not new. With the rise of the iguana, more and more private contractors are stepping up to tackle the issue. In reality, man is the only predator that can have a real impact.

Additionally, these entrepreneurs have created a secondary market for the iguana meat. On the grill or prepared in any number of manners, the white meat of the legs and tail can be very tasty.

Hunting iguanas in urban areas is tricky. Rondan guided myself, outdoor writer Larry Case and Gamo Quality Manager Tony Stratis a couple days in late August. Our hunting grounds was a massive apartment complex that, like most such housing in South Florida featured multiple lakes.

We were shooting in tight places – in between buildings – sometimes with complexes directly in the line of sight. We have to plan and execute each shot with extreme attention to detail and a higher acceptance of personal responsibility. The iguana has be positioned so that the pellet entered the ground in case of a miss or pass-through.

“Nobody takes a shot unless I give them the go-ahead,” Rondan said.

This is not a job for amateurs, and it’s why contractors carry insurance and have contracts with these complexes. It’s also why airguns are perfect for the job. We used the Swarm Magnum and Swarm Bone Collector, both Gen2 and .22 caliber. Shots are under 20 yards, but the kill zone on an iguana is the size of a nickel (side of the head).

For ammo we used the Gamo Red Fire pellets for their penetration and ability to dump all their energy on impact. They help prevent pass-throughs and put all the power right on target for clean kills.

Accuracy is just part of the equation; you also need something very quiet. Both the Gamo Bone Collector Swarm Gen II and the Gamo Magnum Swarm Gen II are moderated airguns, making them quiet and well suited for the job. 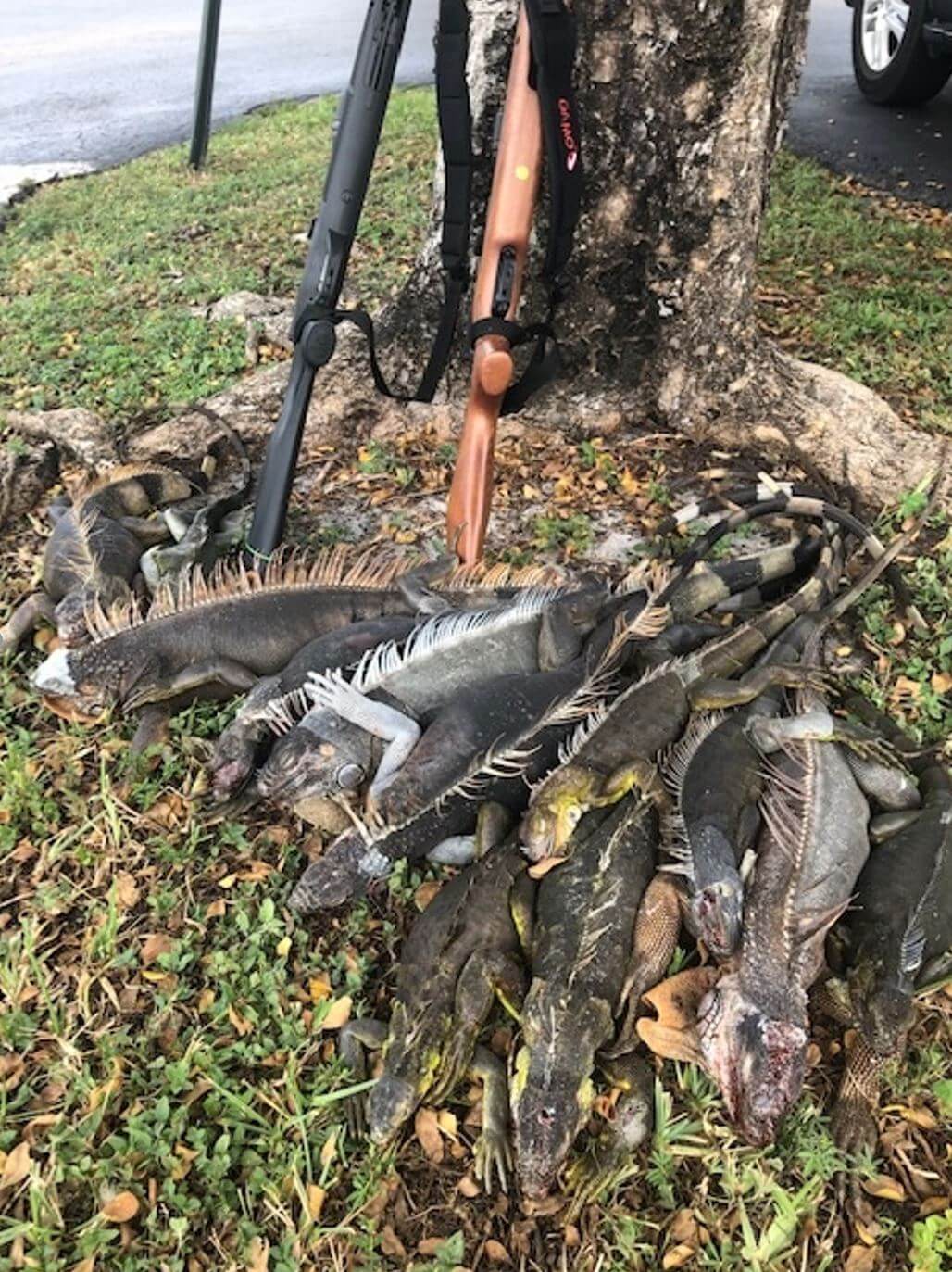 The last factor needed is power. While you don’t need a lot of power to put down an iguana with one shot, you do want to have enough power on tap to get the job done. Anything from 15 to 25 foot-pounds is more than enough. The Swarm Magnum and Swarm Bone Collector produce around 28 and 20 foot-pounds respectively, shooting the Gamo Red Fire pellets.

While not 100% necessary, having a quick follow-up shot on tap is a real help. While you always want that perfect “one and done” shot, the truth is that you may need to take two or three to make sure that the game is down. This would normally mean hunting with PCP airguns. Fortunately, our Gamo airguns are all Multi-Shot breakbarrels with 10 shot magazines. So, having another pellet ready to go as a follow-up was invaluable and a distinct advantage in the field.

“I use three methods for eradicating these iguanas,” Rondan said. “I use traps, catch-poles and airguns, and airguns are the most effective. I use nothing but Gamo breakbarrels for their power and accuracy, and because they are quiet enough they don’t alert the residents. Those that are in the apartments right next to where we shoot can hear it, but they’re mostly very supportive and want these pests gone.”

We have our target. We have our gear. Now it’s time to put it all together. Our guide started us on a property where we immediately spotted iguanas lying in the grass, on the bank at the water’s edge, and in trees. It took some time to acclimate to hunting so close to buildings, but we learned quickly to line up our shots always with a downward angle and always to watch what may be behind an errant shot.

Fortunately, all our shots were inside 25 yards, which made the process much safer and effective. Iguana-after-iguana fell to the might of our air rifles. The biggest of the day was easily 6-feet-long from nose to tip of the tail. Others ranged from 18 inches to over 5 feet. Each gun delivered instant kill shots and provided our shooters put the pellet in the right spot. It was an exceptional day of hunting and one that we look forward to doing again.

Recent Posts
Recent Comments
Archives
Categories
Share
GAMO Fold & Fire Freestanding Air Rifle Target
Swarm Magnum 10X GEN2 Inertia, Red Fire .22 Cal, and invasive iguanas
Close Cart
We use cookies on our website to give you the most relevant experience by remembering your preferences and repeat visits. By clicking “Accept All”, you consent to the use of ALL the cookies. However, you may visit "Cookie Settings" to provide a controlled consent.
Cookie SettingsAccept All
Manage consent